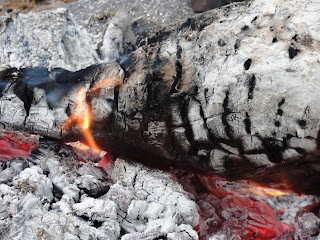 I
AMERICAN BBQ
Beef Chuck Ribs
One of the best ways to get started making good BBQ is finding a good butcher. Like all types of cooking the most important thing is the ingredients. Its wise to shop but never skimp. By going to the local butcher you will support a family business while also getting a superior product. Generally speaking the big grocery store chains are lacking in quality and freshness and even more important they are inconsistent.
I started this BBQ by getting a hold of some nice beef chuck ribs. The chuck ribs are the same as short ribs but are more tender because they come from up under the front legs of the cow. They are covered in muscle that does not get that much work, which makes for tender more juicy meat. When shopping for beef look for a good marbling of fat like below. 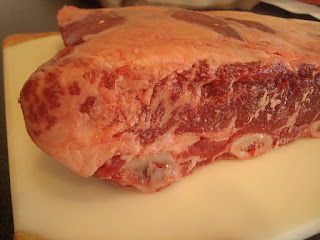 When you are ready to BBQ fire up the smoker. I use a UDS (Ugly Drum Smoker) That I made my self. It is made by retro fittings steel 55 gallon drum. It is very easy to do with some supplies and simple tools that you most likely have around the house.I will go into the UDS in greater detail in the pages to come.
American style BBQ varies from region to region but the basic principle is the same. It is a low and slow process of cooking meat in a closed compartment over indirect heat. There are a number of hard wood species to use all giving different flavors. Traditionally BBQ is pork, but now it covers all sorts of meats. The cooking process is the same.
The chuck ribs pictured here were seasoned with sea salt only. You can buy all sorts of rubs or you can make your own spice combination. I use rubs sometimes but for something like beef ribs I want nothing but the flavor of the fire and the beef. Why cover it up? 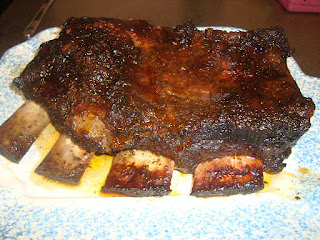 I smoked them in the UDS at about 300 degrees for 7 hours. This gives plenty of time to break down the connective tissues and make the meat tender.
I cook beef ribs to an internal temperature of  170 degrees. This usually insures a tender juicy finished product. I will go into this more in the future.
Another really important subject with BBQ is smoke. Always look for thin wisps of "blue smoke".  You never want billowing clouds of white smoke. This means your fire is smothering. Give the fire more air till the smoke calms back down. I know the inclination is there for most beginner BBQ'ers to smoke the crap out of there meats with an insane amount of smoke thinking it is a good idea. It isn't. your BBQ will taste like an ashtray.
I will go over the art of BBQ in the days to follow with pictures and tutorials of simple steps that anyone can do in their own backyard. Follow just a few simple rules and you will always turn out delicious juicy BBQ that you cant get in any restaurant. 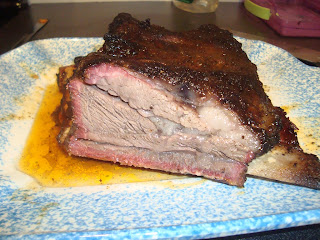 Thanks for stopping in and taking a look. Hope to see you around again.
Bill Capozzoli
Posted by Bill Capozzoli at 8:12 PM