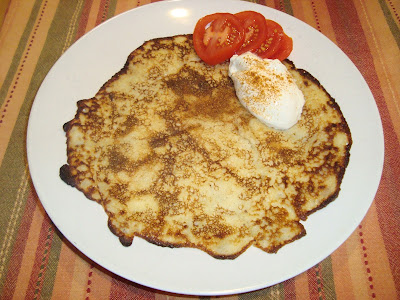 Zemiakove Placky
(Slovakian/Czech Style Potato Pancakes)
I dont know about anybody else but I love potato pancakes. They are a pretty regular vegetarian meal  around our house. They are also great as a snack, real easy to throw together and they are very satisfying. Potato pancakes are made all different ways. From the mashed potato cakes in the US usually made from leftover mashed potatoes mixed with eggs and flour, fried and served with breakfast to the crispy Jewish style Latkes that are my favorite. I just love the crispy texture that goes together so well with the onions and hint of garlic. Served alongside of some sour cream and apple sauce they are just simple perfection.

Pictured above is the Slovakian version. It is more of a pancake then the Jewish Latke but they are very good. Traditionally in Slovakia these are served with a glass of buttermilk or kefir. It is one of those things my wife has to have. If we are out of butter milk and or kefir I have to run out and get some. It just has to be potato pancakes with a glass of butter milk. HAS to be. It reminds her of the old country.
INGREDIENTS: for 10 to 12 placky.
With a box grater over a mixing bowl. grate the potatoes, but not on the big grater side on the other side. The side with the tiny wholes. The idea is to get it to grate into a coarse mush. Now grate in the onion fine too. Put in the minced garlic, salt, pepper and marjoram and mix well. Then add the egg. Mix again while you add the flour a little at a time. The flour should begin to make the egg and the juice form the potatoes begin to get thick. You don't want it too thick, just enough flour so stuff binds.

Now mix again until the batter is the consistency of thin pancake batter. You dont want them thick like regular pancakes but you some want them as thin as crepes either. Add either milk or flour until you reach a good consistency.

Get a large enough heavy fry pan on a medium high burner good and hot. Oil the bottom of the pan liberally. (remember this rule "hot pan, cold oil, food wont stick") Immediately spoon in the batter and spread it out on the thin side with the back of the soon. Saute until the batter is dry on the top and then flip. Repeat adding a little oil after each batch until all of the batter is used up.  Stack them up on a plate and cover them with a clean towel to keep them warm until you are ready to serve.

To serve garnish with some tomatoes wedges or carrot sticks. If you want to be completely authentic have them with a glass of buttermilk or even a glass of sour raw milk. 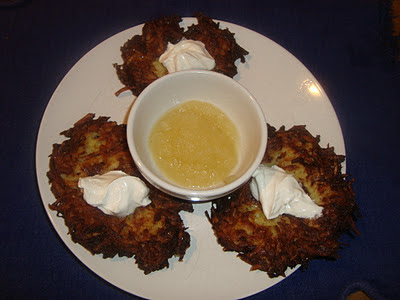 Latkes
(Jewish Style Potato Pancakes)
Slovakian style pancakes are good but I really love the Jewish version called latkes. They are almost the same ingredients wise as the Slovakian version but the texture and flavors are different. Latkes are more crispy like hash browns where the  Zemiakove Placky is soft like a pancake.

With this version set the box grater in a mixing bowl and use the side with the large grater holes. You want the largest grating you can get. Grate all of the potato and the onion coarsely. Then add the other ingredients except the flour then mix well. As the juice starts to come out of the grated potatoes add the flour gradually while mixing using the same procedure as above.

Get a big enough frying pan hot over medium high heat. Add a half inch of cooking oil to the pan and get it good and hot, not smoking hot but hot, about 350 degrees. Now spoon in the coarse batter and press with the back of the spoon. Spread it out a little bit. They should be about 1/4 of an inch thick.

Fry until crisp and brown on both sides. I like my latkes crisp and dark so I do them over high heat real fast. If you want yours lighter just turn the heat down around medium and take a little longer to fry them.

Serve them up with some applesauce and sour cream.

Very easy to do and they are awesome. Give them a try!!!!

Posted by Bill Capozzoli at 7:43 PM