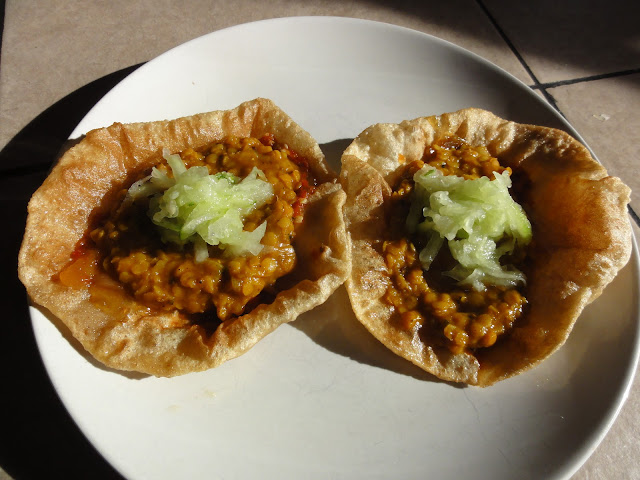 Doubles is one of the best 'sandwiches' in the world.


An exotic treat from the Islands of Trinidad and Tobago most commonly served by street venders all over the islands. I have never been there but I would love to go. For now I can enjoy making and eating this tasty treat. They are made with two Bara; a fried unleavened bread made most authentically with atta or chapaty flour. The two bara are topped with chili garlic sauce, mango chutney, channa masala and grated cucumber.  Channa masla is curried chick peas.

The name doubles comes from the fact that there are two yummy bara. Apparently at some point in the early days after the invention of this dish, someone wanted another bara and asked for doubles. The name stuck.

This sandwich much like most of the Trini cooking is strongly influenced by Indian cooking. Early in Great Britain's colonial days they imported Indian "workers" to the Islands to work the sugar cane fields and other exploits. The Indian cooking techniques influenced the local Trini cooks and magic happened. A tiny wonderful thing came from something not so nice and the world is a better place for it I suppose.

There are many recipes on the internet for making bara but they are mostly makeshift. Not bad just not completely authentic. I have done a lot of research and found that authentic bara is really just Indian Poori. Poori is a simple unleavened bread that is fried till it puffed up into a big bubble.But when making bara they are wrapped in a towel or kept in a container to keep them warm. They deflate and become a little stretchy and resilient.

For ten or twelve bara put two cups of atta flour into a bowl and a half teaspoon of salt. Take a cup or so of water and gradually work it into the flour with your fingers. Do not use a mixer as this will break the gluten in the flour and make the dough rubbery and the bara will not be very good. Work the dough and knead and add water or flour as needed until a firm but slightly sticky ball forms. Cover it with a damp towel and let it rest for at least an hour. The reason to let it rest is the dehydrated flour granules will drink up the water and reconstitute.  Without this resting period the finished bara will not be very tender. 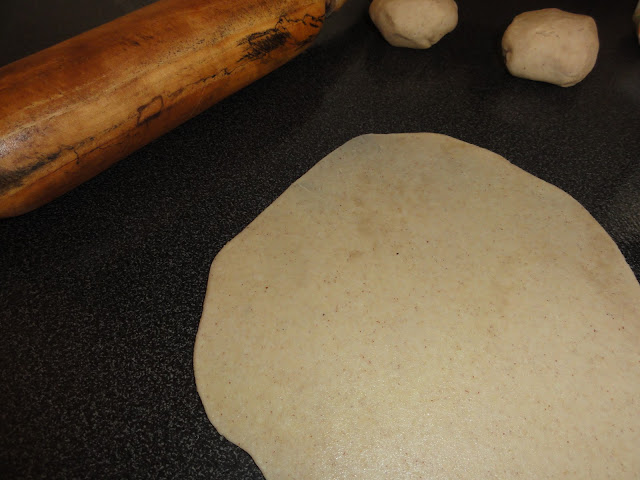 After the dough is ready break off small pieces and roll them into balls about half the size of a golf ball. Then get a small frying pan of veg or peanut oil about 3/4" deep hot over medium heat. Pour a small amount of cold cooking oil in a bowl for dipping a paper towel in. Dip and wipe the area of counter where you will be rolling out the bara. Also wipe the rolling pin with oil as well. This is so the dough does not stick to either. One would ordinarily use flour for this process but the problem with that is the loose flour comes off in the frying oil and burns. Leaving the bara with a burnt taste.  Roll them out until they are about 1/8th of an inch thick. 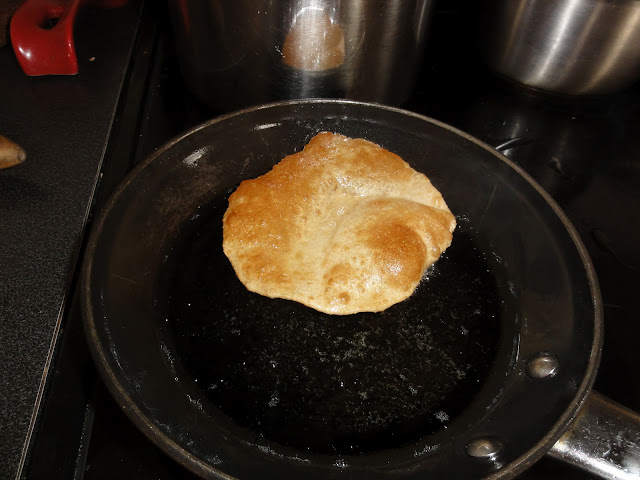 Then carefully drop them one at a time into the heated oil. With tongs or a spatula press them lightly on top to help the bubbles form and puff up. Flip them cooking on each side for 10-20 seconds. Maybe more depending on the oil temperature. They should look like the bara pictured above.Place them on paper towel to drain after frying. 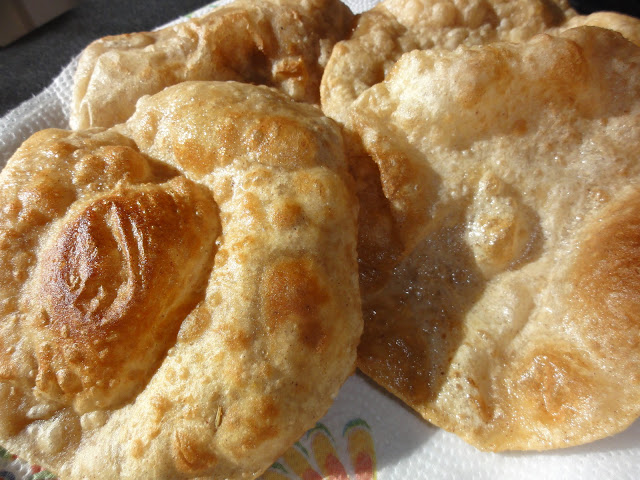 Then cover them with a clean towel to keep them warm and let them cook further in their own steam.

You can use two tablespoons of  pre-made curry powder but whole spices work much better.
When ready to cook them, get a pot hot over medium high heat. then add a little oil. Drop in the spices including the salt and pepper and stir till they start to crackle. Then immediately drop in the onions, garlic and ginger. Stir until the onions start to turn translucent and turn light brown. Then add the chick peas and a small amount of water. Bring this to a boil and then turn it down to low and cover. Simmer till the channa masala starts to thicken and the chick peas are tender.

To serve take two of the bara on a plate and top them to taste. I like the standard combination of  mango chutney, chili sauce and grated cucumber. For the hot sauce you can use just about any brand as long as it is on the thicker side. I like to use Vietnamese Chili Garlic Sauce because it is very similar if not identical to Caribbean style chili sauce.First spread on the desired amount of chili sauce, a generous amount of mango chutney, and a dollor of the chana masala. On top of that place the grated cucumber. 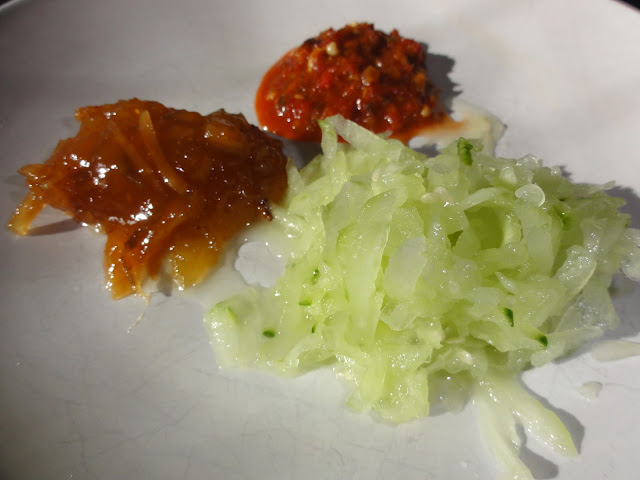 Then they are ready to serve. 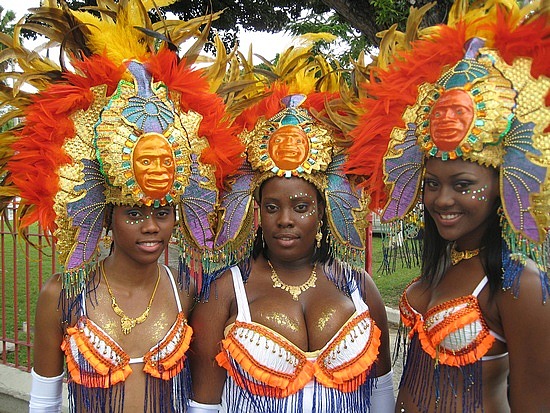 Posted by Bill Capozzoli at 8:05 PM No comments: