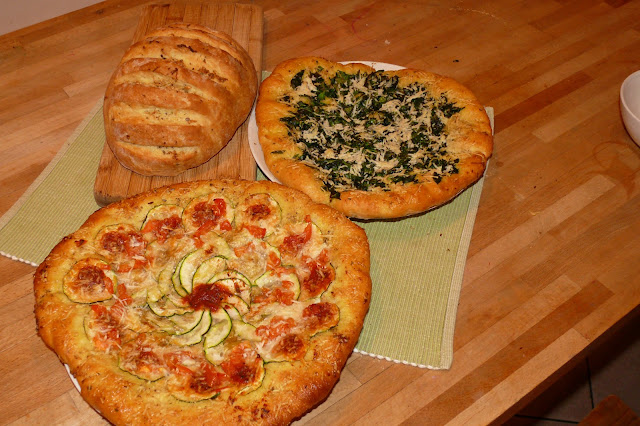 Bread, a simple beautiful gift from the ages, something we take for granted every day. I am not talking about wonder bread either. It is a shame how much we have lost in our world of convenience. They have sold us on the idea that it is better and easier to buy a pack of some kind of bread like substance rather than turn on the oven and bake it ourselves. Well it may be SLIGHTLY easier but it sure isn’t better or even anything that I understand bread to be. 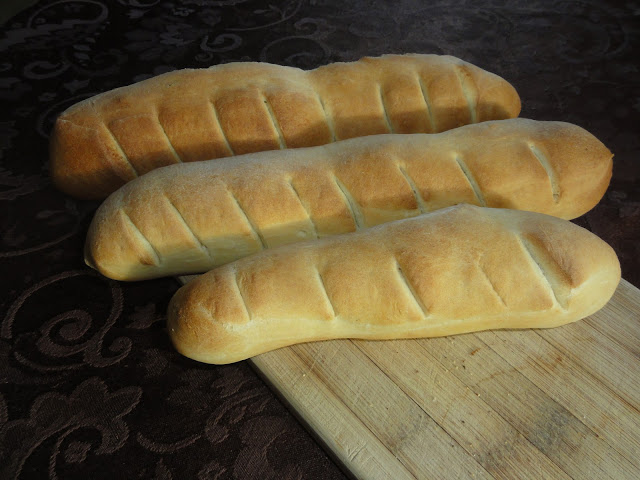 For thousands of years family’s and even entire villages have gathered around great hearth ovens to bake their bread for the week. They would make not just bread but all kinds of stuff. Like pizza for example. These ovens were not only for baking but indeed social gathering places, especially in winter when it was extra comfy to huddle around the wood burning hearth with friends and family. 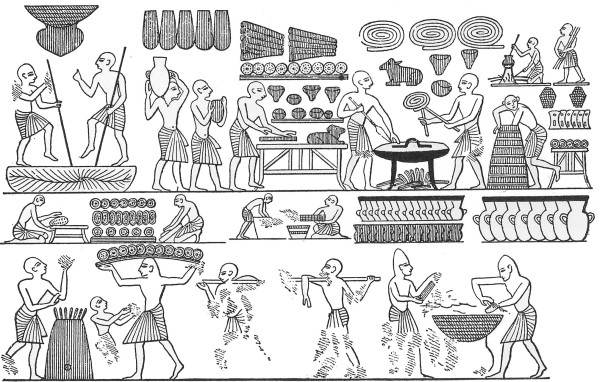 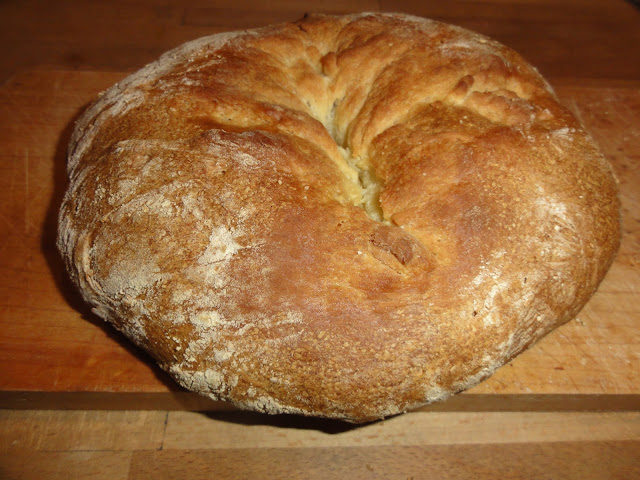 Making bread is not hard at all. If you are into cooking I highly recommend getting into bread making. It takes a little practice but once you have a system down it is as easy as one two three.
Bread making requires high heat. Some baker’s hearths and brick ovens are 800 - 1000 degrees. These heats are not possible in the conventional oven in your kitchen. But there is a way to get really great results if you get a few items and follow a few rules. 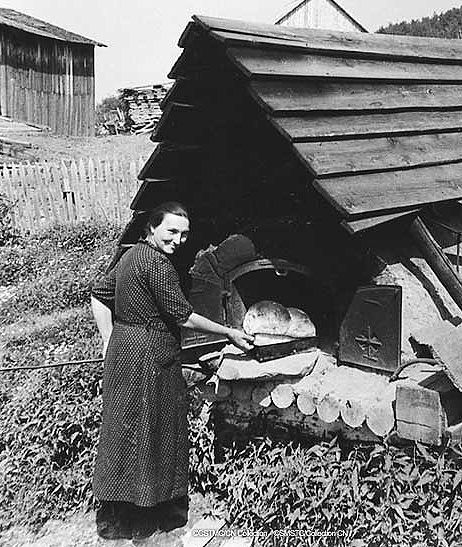 Baking Bread in Slovakia with a back yard hearth Circa 1950 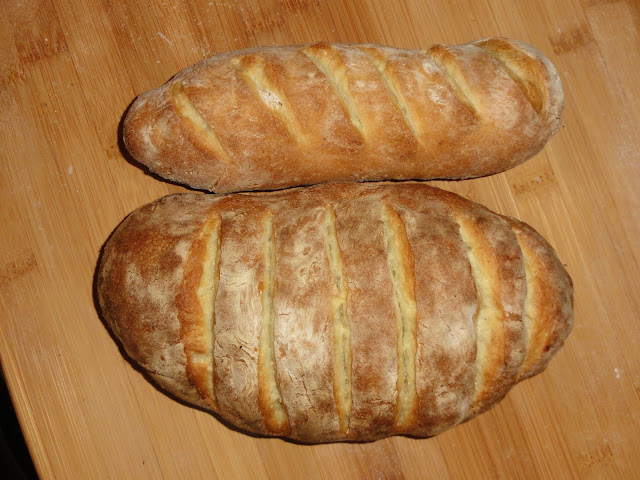 French Bread an Italian Bread
(The difference being only one ingredient, Butter with french bread dough, olive oil with Italian bread dough. French is longer and thinner the Italian is a round or oval loaf typically.)

Some things you will need include a dough mixer. I feel any good cook should have a KitchenAid mixer. I could not live without mine.  Bread machines do not make great bread but they are great for making the dough. If you get one of these or have one already make sure that it has a dough only function, also make sure that you can set the dough only function on the timer. This is great because you can put the ingredients into the dough machine in the morning before leaving and then you can return home with fresh dough ready to be rolled out and baked in time for dinner. Yes you can make the dough by hand but this is strenuous and takes a good deal more attention.

You will also need an oven stone. This is a ceramic or clay square or circle that goes on the oven rack. It holds a lot of heat and pulls excess moisture out of the dough as steam forms inside during the baking process. This is one of the main reasons people do not get good results when they first try bread making. The oven and the stone must be very hot before you put the bread in the oven. 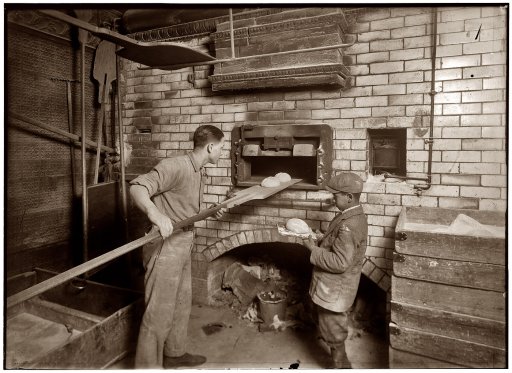 THE DOUGH
There are many different dough recipes. I suggest starting with simple French bread dough. It is easy to make and it is great practice to get started. One rule of dough making is use the same exact amount of ingredients every time consistently. Exact. If you are using a bread machine follow the recipe for French bread that comes with the machine exactly.
Set the machine on dough only and it will do the rest.

If you are using a kitchen aid or other dough mixer follow this recipe for two or three French or Italian loaves.

1-3/8 cups of lukewarm water
3 tablespoons of olive oil or melted butter
1 ½ teaspoon of salt
1 tablespoon of sugar
1 packet of quick rise dry yeast.
4 cups of unbleached flour or bread flour.
More flour and some semolina or coarse ground corn meal for spreading out dough on counter, peel, and oven stone.

Mixing the dough
Set up the mixer with the dough attachment. And put the bowl on. Add the warm water, yeast, salt, sugar and fat to the bowl. Turn the mixer on low and gradually add the flour mix on low until a dough forms, stopping the machine and pulling the dough down as needed. After a ball of dough has formed remove the bowl and then knead the dough over a couple of times.

Now cover the bowl with a clean damp towel and put it in a warm area to rise. After it more than doubles in size (about an hour or so depending on temperature) take the bowl to the counter.

Wipe clean and spread some flour out onto the counter that you will be using as your working surface. If using bread machine dump the dough out onto your floured surface.

Dump out the dough and punch it down. Then cut it into three or four portions. Fold and knead the dough balls a little and then form a ball using your fingers. Don’t try to roll it out on the counter like a ball of clay. Fold it under into itself until it forms a ball, then pinch the bottom. Now form it into the shape you want. It can be round, oval or a long thin baguette. Sett the small shapes onto the well-floured counter. And cover them with a warm damp cloth to rise again.

After they double in size they are ready for the oven. At this point be very careful when you handle them or move them. Try not to punch them down. 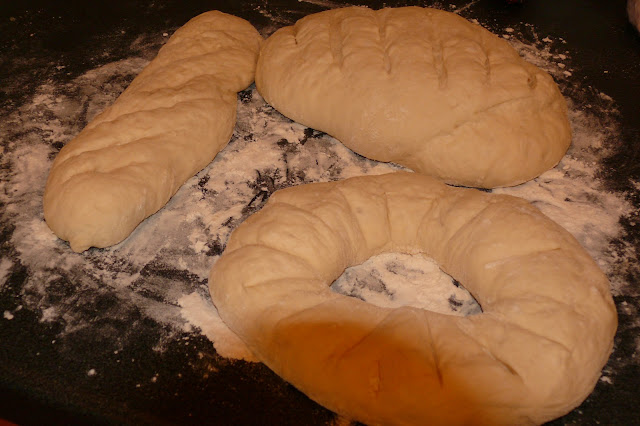 BAKING
Here is the real trick to making good bread in a regular oven. Set the pizza stone in the oven on a rack about ¼ from the bottom. Then turn the oven on broil for the pre heat. Let it heat up for at least 15 mins. on broil. This will get the stone good and hot. The stone has to be very hot because this is what will crust the bottom of the loaf. If the stone isn’t hot enough the top of the loaf may end up with a nice crust but the bottom will be white and soft. 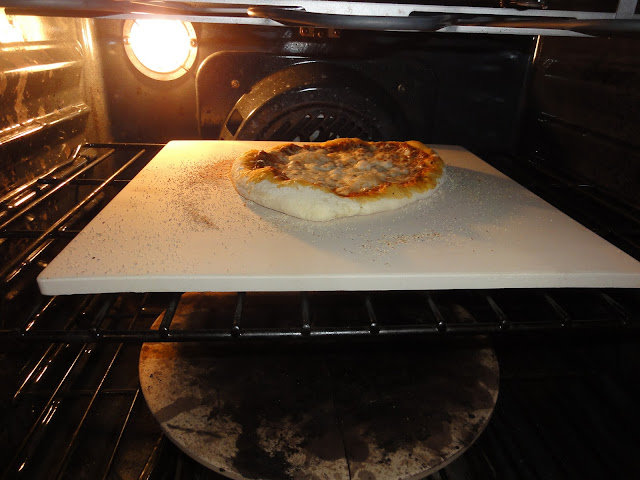 Now spread out some flour mixed with coarse semolina or corn meal on the counter and onto the peel covering it well so the dough does not stick.

Uncover the dough and take some flour onto your hands. Lightly spread some flour onto the top of the loaves being very careful not to deflate them. Score the tops with a very sharp knife (this will keep them from bursting open when they rabidly expand during the baking process) With the peel in one hand and again handling them very gingerly slide the dough onto the peel. Open the oven and carefully slide the dough onto the stone. Be very careful with your hands around the stone. Simply bumping it means an instant burn. Only put the peel onto the stone and give it a flick like snap to get the loaf to come off. Use the laws of inertia to get it off of there. It takes a little practice but you will get it in no time. After a while you will be able to do it with not only bread but the more advanced pizza. I will go into that more in an upcoming pizza post.After you have all of the loaves on the stone close the oven and set it to the highest oven setting lower than broil. 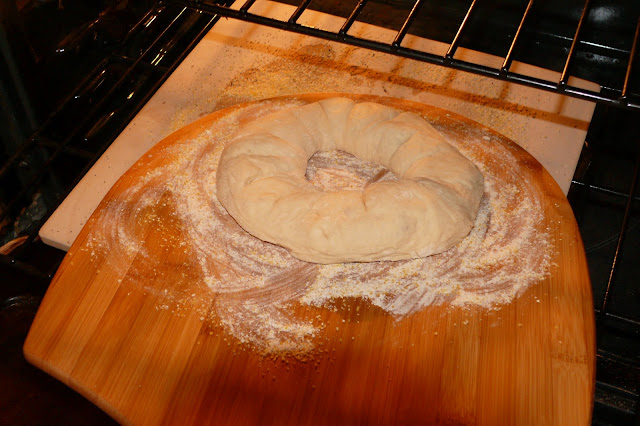 It is always asked of cooks: “How long do you cook it?” Well this is a hard question to answer. Especially with bread, because all ovens are different. The answer truly is cook it until it is done. Check on the bread as it cooks. It will rise more and then start turning brown. Check for spots that may be getting more brown than others this may mean a hot spot in the oven. And just like a professional baker does you may have to move the loaves around in the oven to keep them even. Carefully but quickly reach in and move them around.

If you take them out when they are light brown you will have a softer loaf. More bite-able for say sandwiches. For a hearty crusty bread let it turn dark brown. This will give you a thick rustic crust. 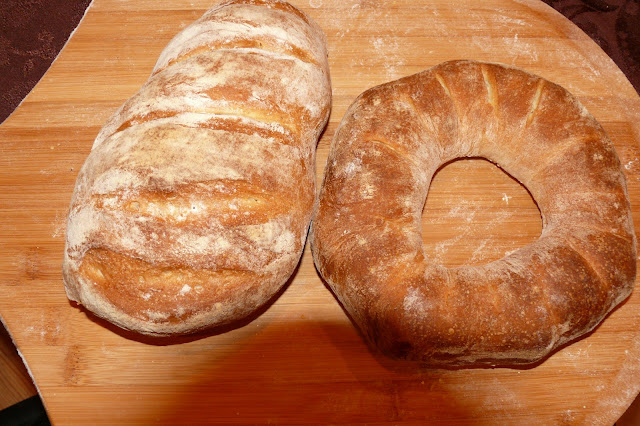 With a little practice using this dough recipe and oven method you will be turning out artisan style bread in no time at all. Then you can branch out learning other types of bread and pizzas.

Making dough is great for the whole family. There is something about kneading and forming dough that every child likes, and it is just so good for them to learn. It will give them a healthy understanding and respect for where food comes from, a life-long skill that they will thank you for, and (most importantly) its quality time spent together.

Making pizza at home is great too and the above dough recipe works very well for that. Do every thing above only spread and stretch the dough out with your hands and fists until it makes a thin circle. NEVER roll the dough with a roller. This will flatten it and compress all of the bubbles in the dough. Always stretch and spread. Then place it on to the peel. Then put on some sauce and cheese. open the oven door and lay the edge of the peel to the back side of the stone shake it back ad fourth a little until the edge of the pizza dough is on the hot stone then quickly pull it back like a magician puling the table cloth from a able leaving the settings. Don't worry if you don't get it the first time, it takes a little practice. After a while your pizzas will be round. . 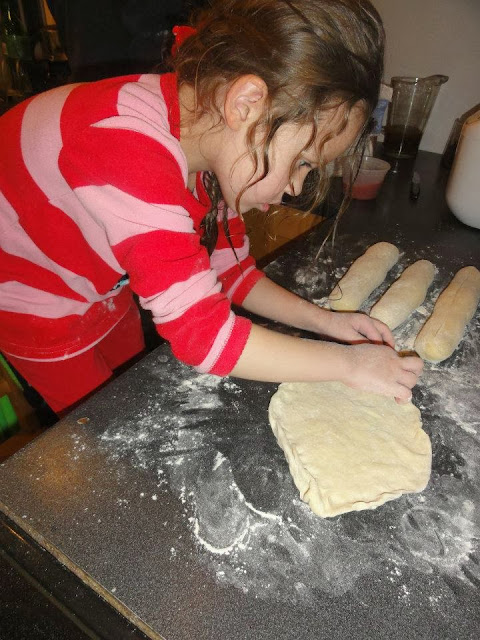 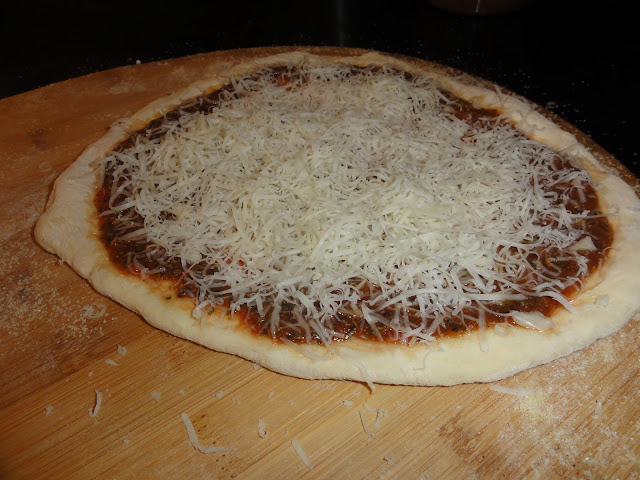 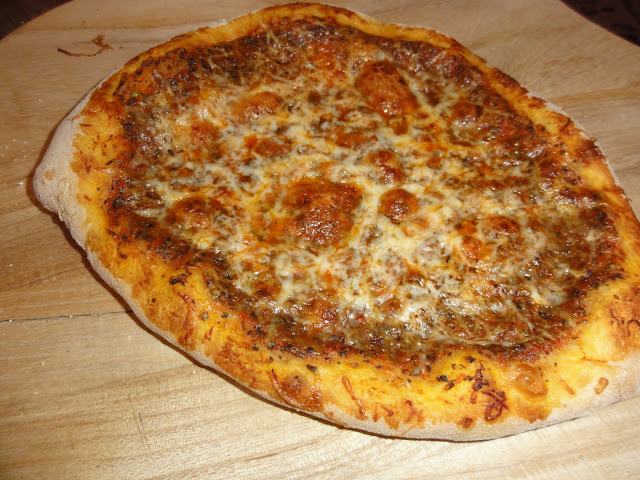 There is virtually no end to the kinds of pizzas that you can make. You are only limited by your imagination. 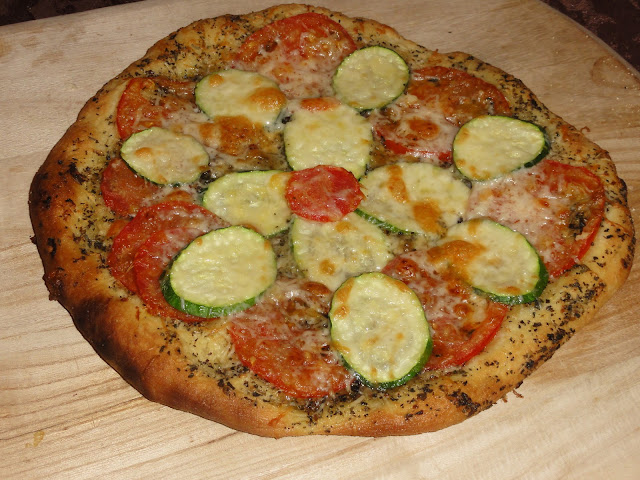 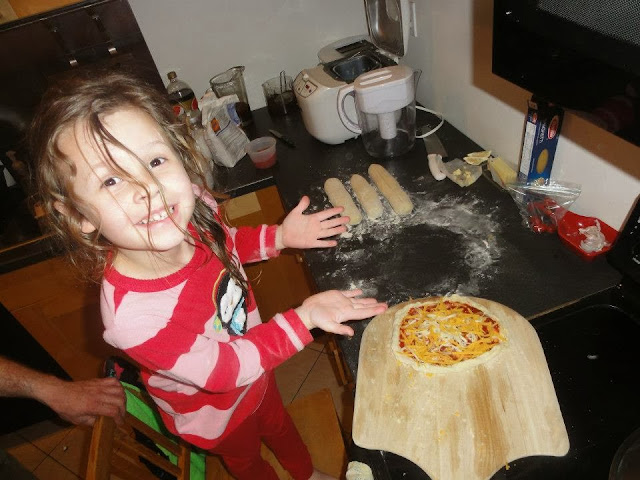 I hope you give bread making a try and that you love it as much as I do. I will be posting more on making bread and pizza at home soon!