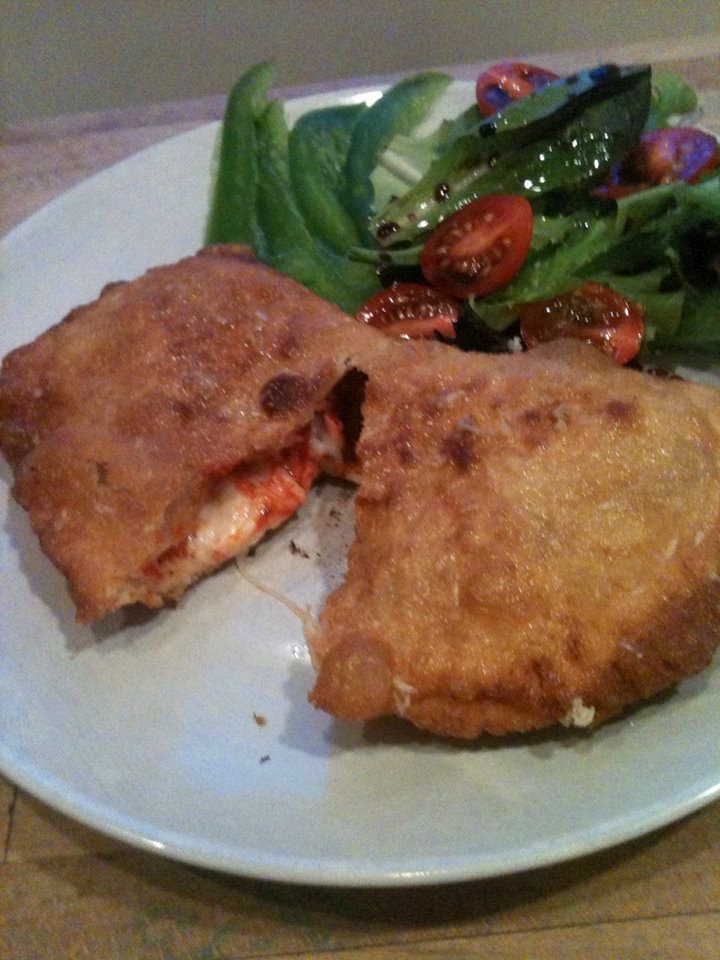 I cant for the life of me figure out what happened to the panzarotti. Where did it go? When I was growing up in the Philadelphia area they were everywhere. Deep fried pizza treats that were delicious beyond compare. I remember my dad getting them from an Italian place that only made fried chicken, panzarottis and pizza.  I remember this being damn tasty stuff that these fryer people had. The Jersey shore boardwalks the aroma of panzarottis swimming in the fryers. On a Wildwood beach day I remember the decision between a panzarotti and a taylor pork roll sandwich for lunch being a tough choice. Taylor pork roll is gone from the boardwalk too. But that is another story.

So like the St Louis's fried brain sandwich the panzarotti is going the way of the dodo. Perhaps because of the diet craze and the all out witch hunt fear and loathing of fat. I dont know? But whatever happened, subsequent generations of Philadelphia residents and tourists will miss out on this once great treat.

When I want to relive my memories of the panzarotti I make them homemade. It is the only way to get one without going to Italy.

Will make a few large panzarottis or several small ones.

Add the yeast and sugar to the warm water. Stir and place the cup into a secondary bowl. Let it sit in a warm place for a half hour or so. The yeast will activate and foam up. The secondary bowl will catch the over flow if there is any as the yeast wakes up.

Add the flour to a large bowl with the other ingredients. mix in the egg and oil. Then gradually add the yeasty water. Mix each time after adding a little liquid. After it forms ino a nice ball that is not to wet and not too dry knead it over a few times and form it under into a ball. Then cover it with a damp kitchen cloth and set it in  warm place to rise. After it has risen, "punch it down" and form it into balls about twice the size of a golf ball.  Cover with the damp towel and set them to rise again.

Left over gravy or marinara sauce will work great. If not make plain old pizza sauce. You do have your own pizza sauce recipe, don't you?

Grate some nice mozzarella, provolone, Parmesan, locatelli alone or in any combination.

When the balls of dough have risen again clean and prepare a section of the counter for rolling.

*Here is a great cooking tip. When rolling any dough for frying never flour the counter and rolling pin. This will add lots of loose flour that will come off in the oil and burn very quickly and can make your food have a burnt taste. Instead use cooking oil. Pour out a tablespoon of oil or so and rub it around with a paper towel where you will roll. Then with the paper towel wipe down the rolling pin.

Now take te balls of dough one at a time and roll them out to about twice the dimensions of the desired panzarotti size. Take your time and try to make them as round as possible 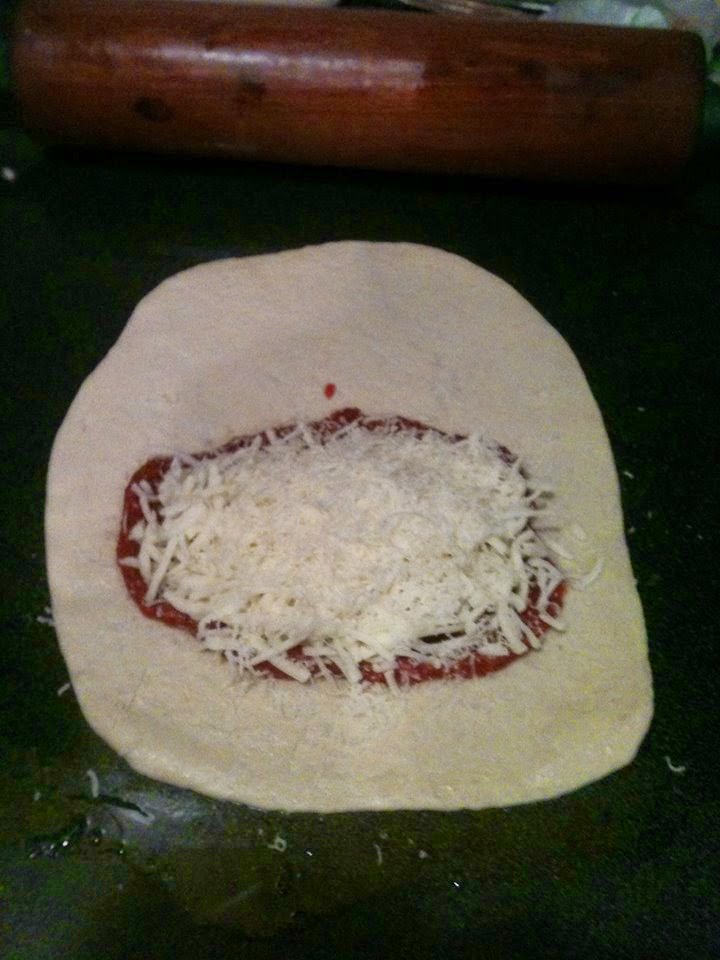 Spoon on the sauce taking care not to get it near the edges as tis could interfere with the joint when you close it. A rupture can happen in the oil and the cheese and sauce will come out making a big mess. You can put other fillings as well. Sausage, peperoni, anchovies, spinach, mushrooms. Almost anything, but I would suggest if this is your first time having panzarotti to try it it unfettered with just sauce and cheese. Then try other things later.

Now fold the dough carefully over the top and seal the closure very well. Use a fork to crimp it closed. Set them on a lightly oiled surface while you get the oil ready. 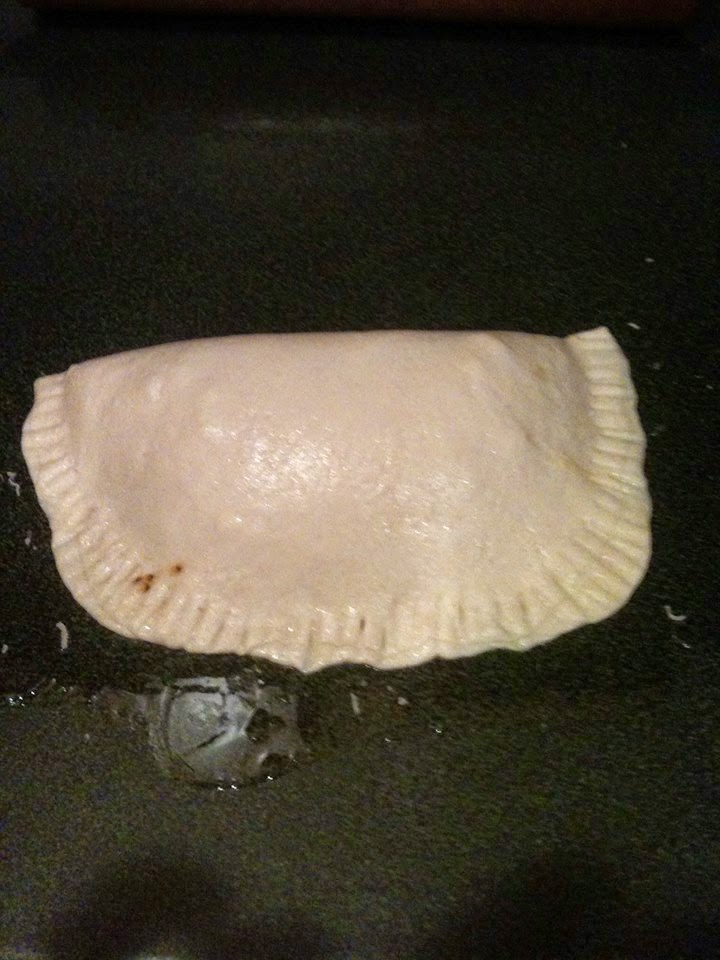 *Here is another great cooking tip: The best way to get great results with deep frying is to use lard. That is rendered pork fat. We get pork fat from a Mexican grocery store. I use it when I am getting serious about deep frying anything. Pork lard hits the right temperatures and is the right viscosity to get the best frying action. What most people don't realize is that when these conditions are right the food will drink up very little of the fat that it is being fried in. There is a reverse osmosis action so to speak. This isn't the case with vegetable oil so things fried in it tend to be soggy not crispy.


If you are not going to use lard veg oil is good, peanut oil even better. Heat up over medium high heat an iron frying pan or something with at least an inch of oil in it. Carefully place the panzarottis in the oil with a spatula if need be. Be aware of splashing hot oil! IF you have a deep fryer that allows you to immerse the entire panzarotti that is great. 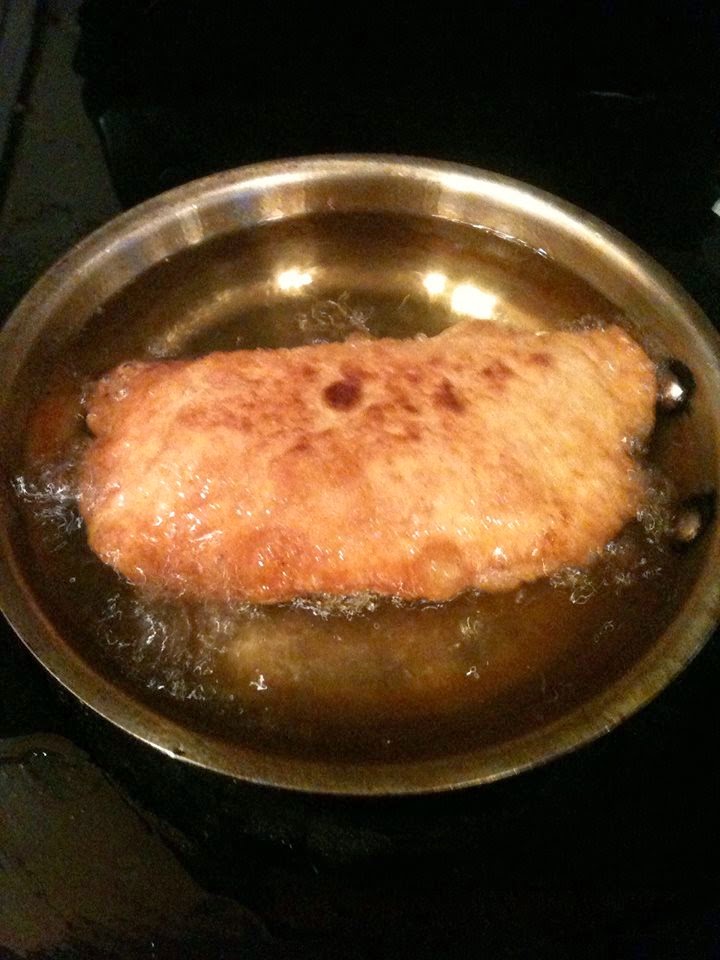 Fry it until it is golden to dark brown and there are blistering bubbles on the doughs surface.
Very carefully turn it and fry it on the other side.

Give this a try, I promise you will love The Panzarotti. They are a delicious slice of fading Philadelphia culinary history and my childhood as well.

Maybe one of these days I will post on the Fried Brain Sandwich.
Something sounds so right about that.

Posted by Bill Capozzoli at 6:04 PM