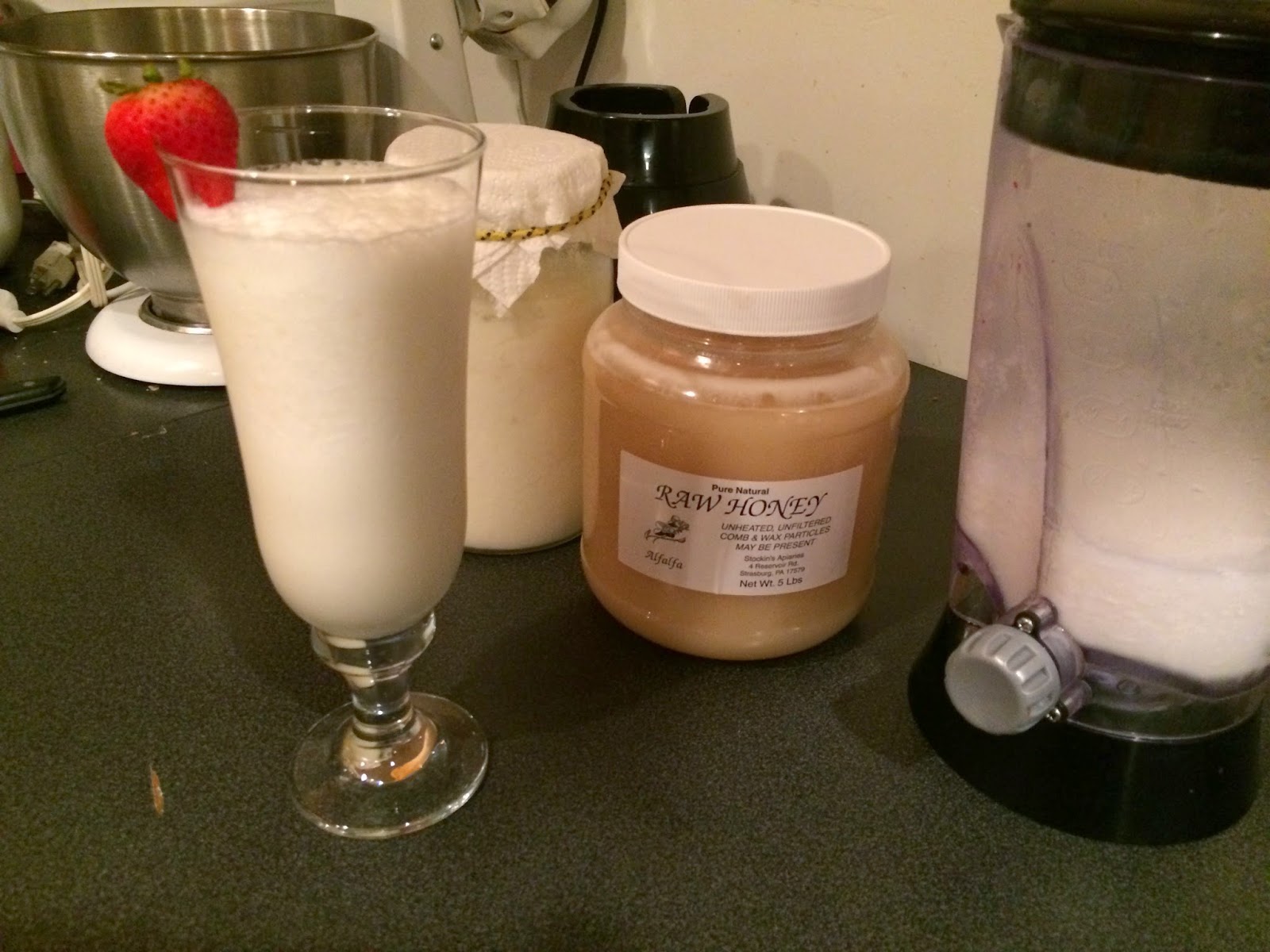 What is kefir?  Well, simply put it is a fermented milk product that is sort of a distant cousin to yogurt but far different. It is an ancient beverage that is very refreshing and considered by many to be VERY healthy, mostly because of the plethora of pro-biotic bacteria.

The word kefir, which originated in the Caucasus Mountains, comes from kief which translates to 'good feelings' no doubt from the sense of "well being" one can feel after drinking this beverage.  It is creamy, sour, and slightly effervescent. it can be described as having notes of lemon and beer in both aroma and flavor. Among all of the healthy bacteria contained in kefir from its fermentation process it also has alcohol. Yep alcohol! Depending on the milk that is used and how long it is fermented up to 3 percent alcohol can develop.
Not to shabby.

Much like with yogurt or almost any food, the commercial kefir that is available in the store is only a mere shadow of the real thing. The only way to get the real thing is to make it yourself. It is very easy to do and the only thing you will have to get is fresh, healthy kefir "grains" and some fresh milk.You an either get the grains from a friend that may be making kefir at home or you can buy them. I highly recommend  using organic milk at the very least. Commercial milk is bad for your kefir grains and no doubt bad for you. We use only raw milk in our house and it works great for making kefir. 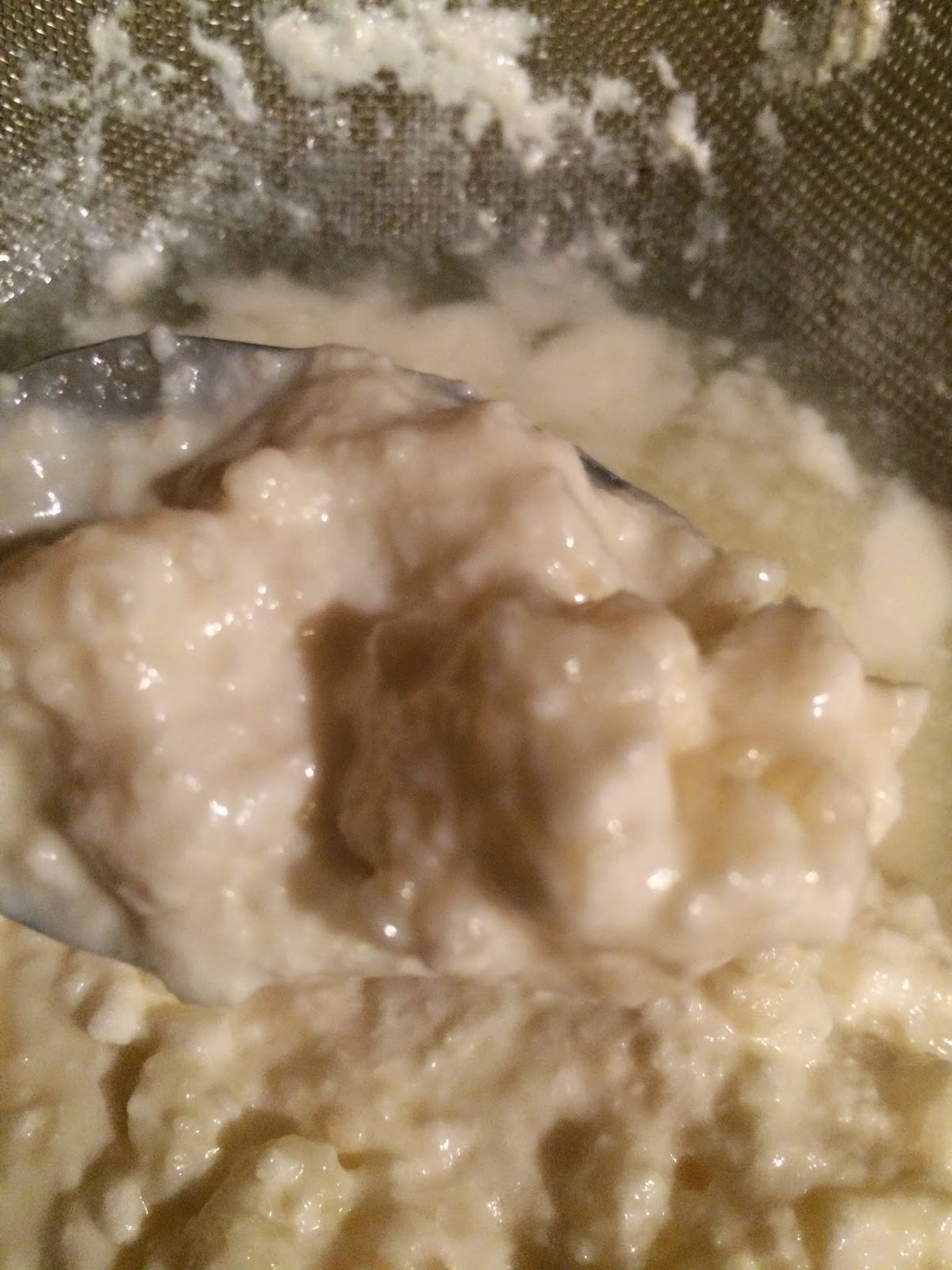 Lets talk for a minute about kefir grains. They are not actually grains in the cereal sense of the word. They are just called grains because of the granular appearance that they take on. They are grain like, kinda? What they are actually is a biological mass made up of protein, amino acids, lipids and polysaccharides. 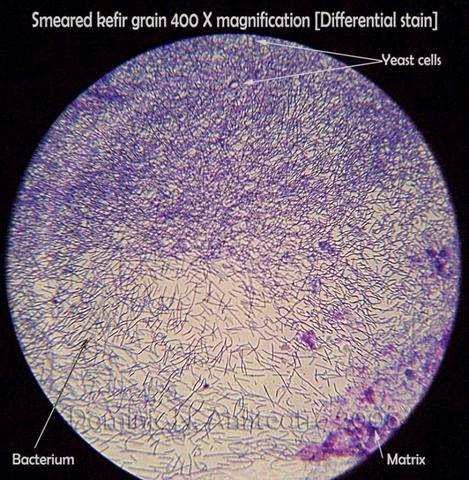 These enclosed bodies are created buy a symbiosis of yeast and bacteria which don't ordinary get along in nature. so it is kind of interesting. They not only create the bio-matrix structure they are also  encapsulated within it. So, literally they build this house together and live within it peacefully. Cant we all just get along? 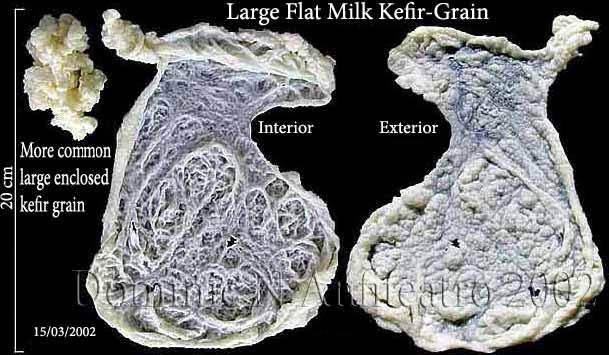 Section view of a kefir grain

Kefir is easily made at home like it has been for thousands of years by putting kefir grains into fresh milk in a nonreactive container. Glass or some kind of pottery crock is best. Don't use metal or plastic. The grains need oxygen to do their thing in the fermentation process so don't cover with a lid. Instead cover the glass jar with a some cheese cloth or a towel to keep out dirt or any bugs that may wonder by. Tie it on with some string or use a rubber band. Set it in a dark place at room temperature and 24 hours later you will have a mild kefir, two three or more days, up to a couple of weeks it will get stronger and stronger, more sour, more alcohol content and with more pro-biotic culture. 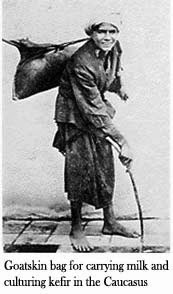 It is important to note that after three weeks there is  the risk that the grains will die because they have exhausted the nutrients they derive from the milk and they essentially starve to death. The kefir grains can be removed to a new batch and the existing batch can be further fermented. I have had kefir in the cabinet for over 4 months and it was still drinkable though very strong and very hard to describe in flavor.One of the reasons kefir grains have been so prized over the centuries is their use in the preservation of milk for storage without refrigeration.

The grains will live indefinitely so changed over with milk on an ongoing basis by straining the finished product and adding new milk they will go on and on making you as much kefir as you desire. If you want to take a break simply put them in a small amount of milk and cover them with a towel tied on top into the fridge. Change over the small of amount of milk they are in every two weeks or so to "feed" them. They will sort of hibernate. When you are ready to make kefir again just take them out and add them to the desired amount of milk. They will wake back up. 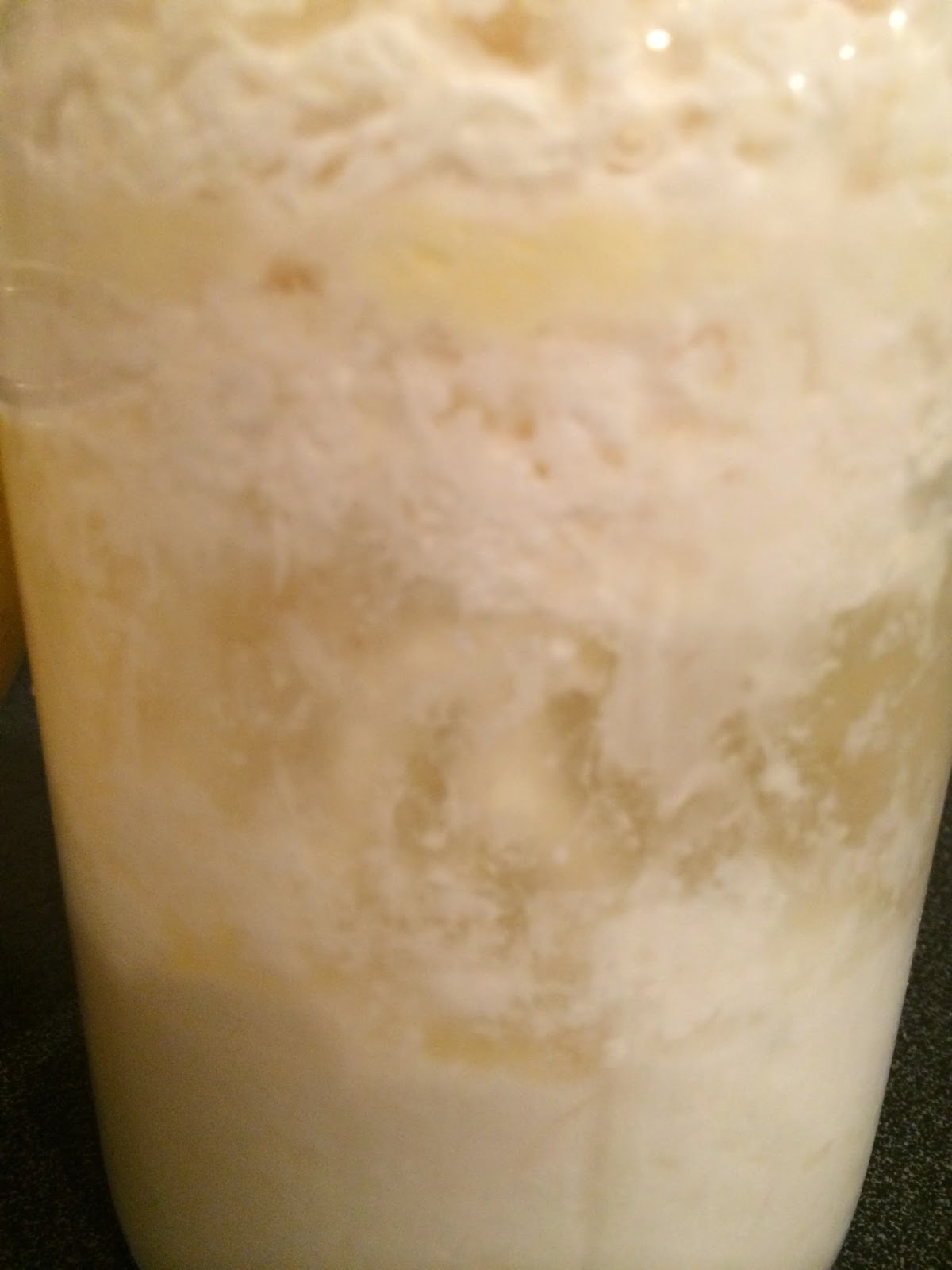 When kefir is fermenting it can be kind of scary looking. It separates and even movement can be spotted. Don't be alarmed by this because after it is strained it mixes right back  together into a creamy consistency with a whisk. 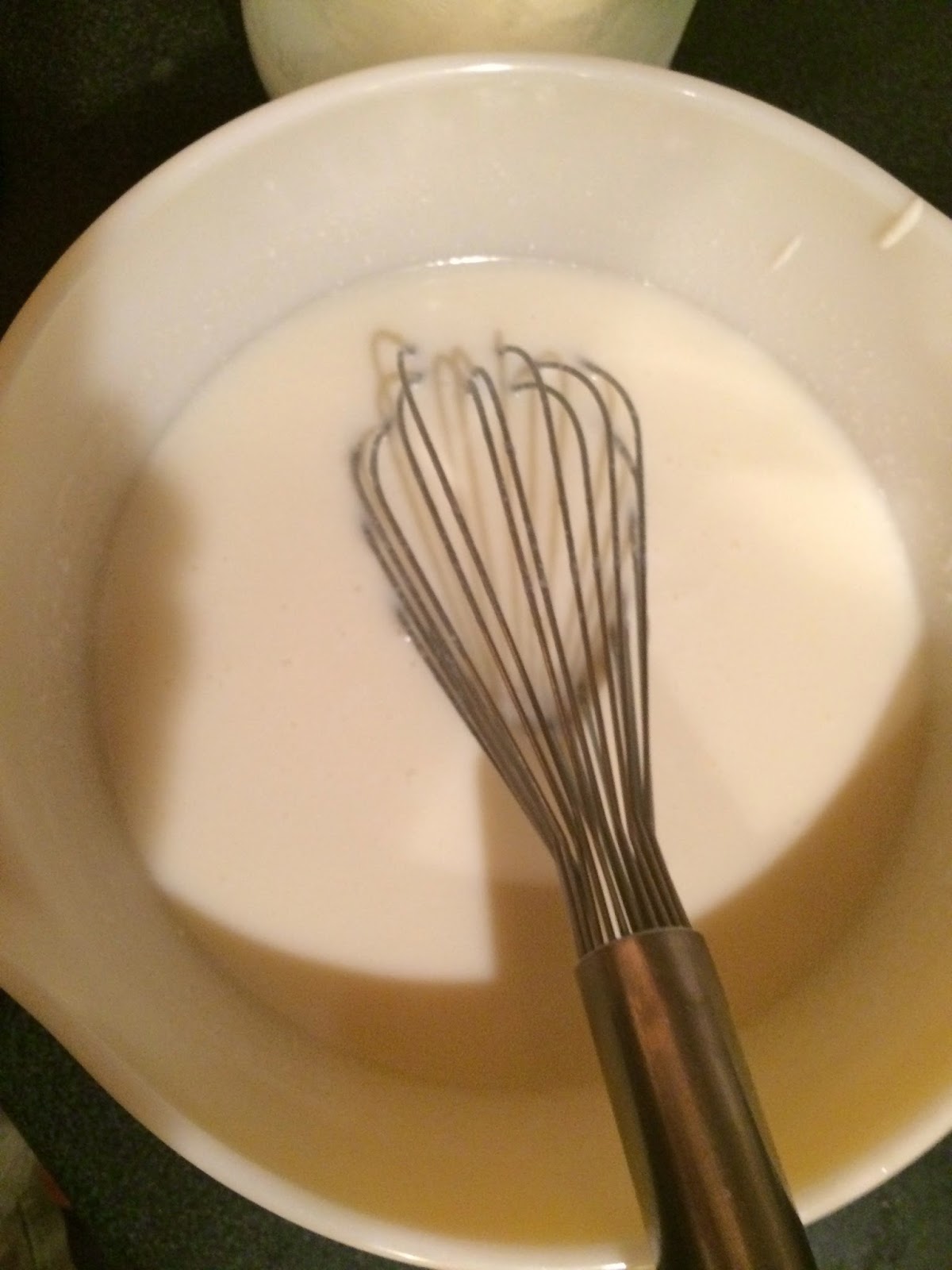 After the Kefir has been strained from the grains and whisked back together it can be stored in the refrigerator indefinitely. It is alive. You could actually even store it in the cabinet at room temperature and let it mature. There are ways to make cheese with it!

The best way to enjoy kefir in my opinion is blended with ice and fruit or honey, even maple syrup. You can make just about any kind of kefir shake your imagination can come up with. 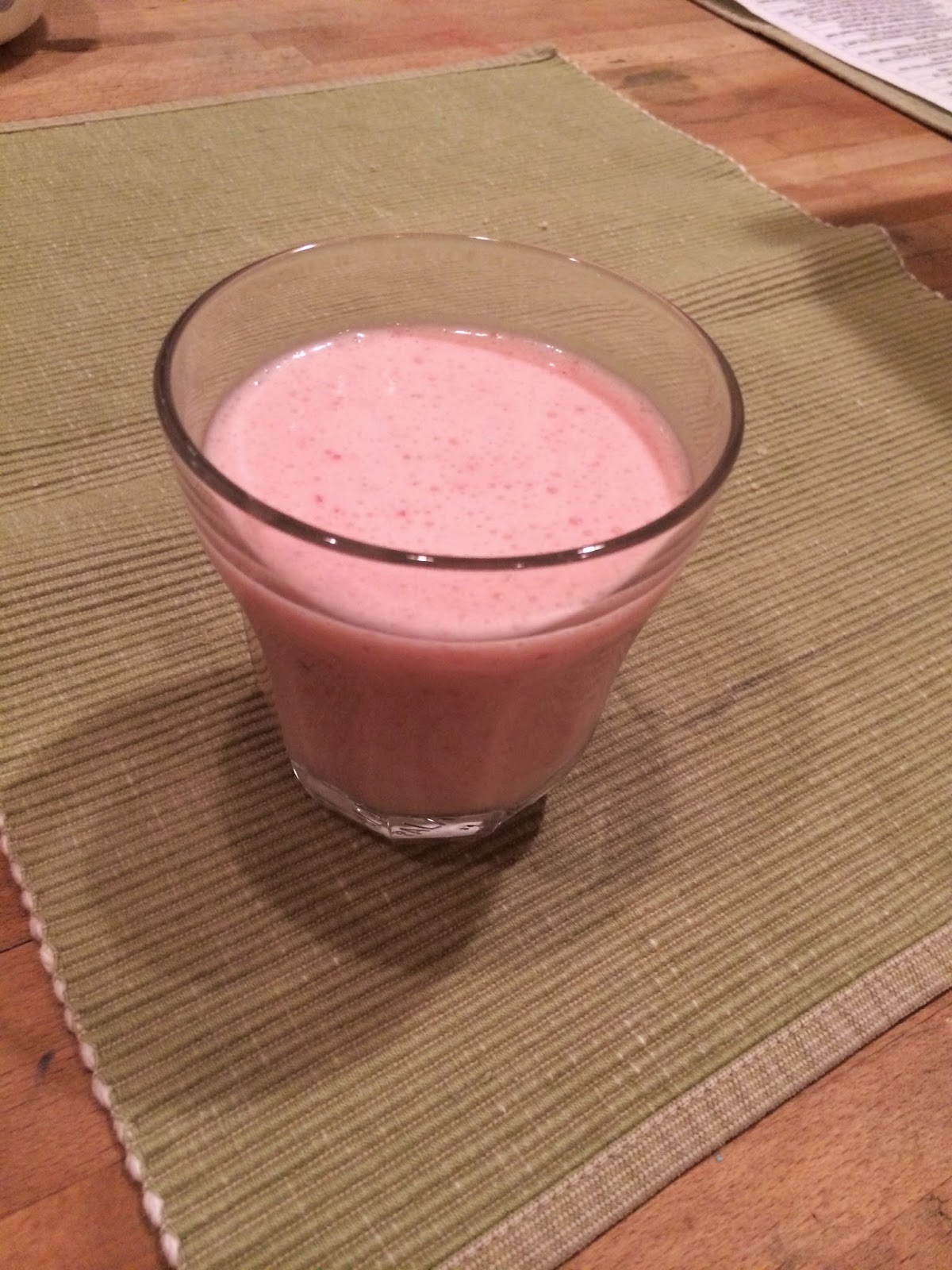 There are MANY widely accepted claims about the health qualities locked within kefir.
Certainly one benefit is the pro-biotic bacterial cultures that will build up in your digestive track if you consume it. Your body needs this flora of healthy bacteria to help with digestion and perhaps a good deal of other things.. There is something we are loosing in our world of convenience, sterilization, pasteurization. It gets worse with sanitizers and antibiotics too. They kill bacteria indiscriminately when used and the good guys get killed too. Ever wonder why there is so much lactose intolerance, gluten intolerance, peanut and food allergies? When I was a kid everyone ate peanuts. It was almost a requirement. Nobody had a peanut allergy. Maybe the chemicals we put in commercial food is less of a problem than the stuff we have taken out.

Kefir, it is a super food and has been consumed for thousands of years. It is not just a refreshing beverage, it is a scientific experiment that you can drink!

Give it a try! Let me know if you need some kefir grains.

Posted by Bill Capozzoli at 7:47 PM No comments: