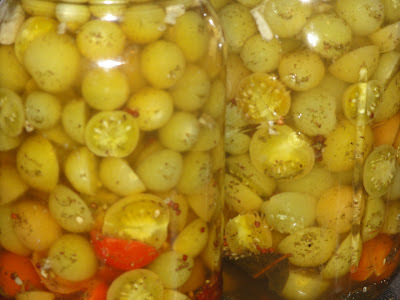 
Pickles are wonderful. Its very interesting to see and taste all of the different types of pickled fruits and vegetables from around the world. From the ubiquitous Jewish dill to the indescribable Indian pickled lime. I can safely say that I have never had a pickle that I didn't like.
So many pickles, so little time.

Pickles are easy to make, like with sauerkraut one only has to be patient. Pickling, fermenting and canning are a great introduction to the world of food preservation and they are a great way to bring summer garden freshness to the winter table.

At work the other day we were outside of the shop in the court yard and noticed that there were hundreds of tiny cherry tomatoes still surviving this late in the season.We plucked and ate several that were nicely ripe and delicious. Fearing that the other green ones would not last much longer I picked them all and brought them home to make pickles.

There are literally thousands of pickle recipes from all over the world. This recipe is a very simple one and a great way to use up any green tomatoes you may have out there in the garden.

Pick clean and was the tomatoes and slice them in half, this allows for the brine to easily penetrate the interior of the fruit.

Then sterilize your  jars in boiling water and set them aside.

For each 16 oz jar you will need about a cup of the following brine depending on how well the jars are packed. In a large enough pot bring three cups water to one cup vinegar to a simmer. Add two tablespoons of kosher or sea salt to the simmering liquid. Do not use iodized salt.

As the liquid simmers put your spices into the jars.

I put in about two tablespoons total of the following mixture into each jar.

I then add a clove of fresh garlic chopped and a tablespoon or so of chopped fresh dill.

Then fill the jars well with the tomato halves. Pour over the hot brine and fill the jars until there is about a half inch of space or head room as it is called. Don,t worry if the tomatoes float over the top of the liquid, they will drop back down as they sit in the hot brine. Now place the jars into a pot of boiling water large enough that the boiling water is 3/4 the way to the top of the jar.  as you would for all canning.  Be careful that you don't splash and get burnt. Wearing some oven mitts is a good idea. Then clean off the rim of the jars well and seal the lids. Simmer the jars for another 15 minuets or so. Take the jars out and let them cool. Place in a cool dark place and in about six weeks after which you will have some wonderful pickled green tomatoes.

You can find several recipes for spice mixtures, brine and method. You can also experiment and use your imagination to find your own unique pickle.

I made two batches, one is a regular version like above, the other is made super hot with the addition of a few red chili peppers in each jar.

I remember my grand father making pickled green tomato which I liked very much. He would sometimes slip one of his unbelievably hot ones in on us grand kids just to see our reaction. He was kind and loving but sometimes a sadistic man. I miss him.